6 Reason To Visit The Southernmost Tip Of India Mainland – Kanyakumari 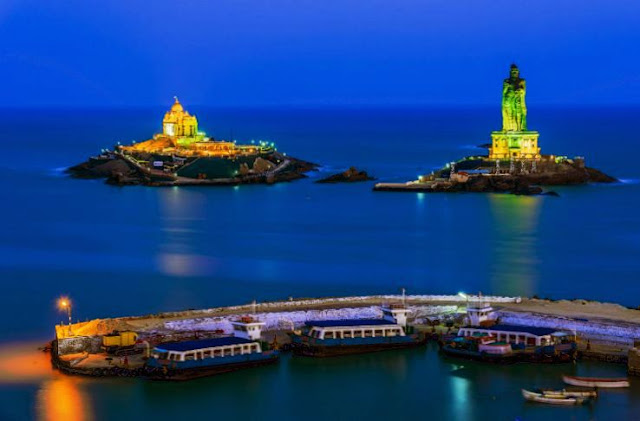 Kanyakumari called cape Comorin during the British rule of India as Its another name, is a small coastal town in Tamil Nadu near the Kerala border. It’s renowned for being the southernmost point of India where the Indian Ocean, Arabian Sea and the Bay of Bengal meet. However, the town also has Special spiritual significance. It’s regarded as the abode of virgin Goddess Kanya Kumari, an incarnation of Goddess Parvati (the divine Mother Goddess). Goddess Kanya Kumari is believed to have done penance there to get Lord Shiva to marry her. Hence, This place is completely Full of holy and spiritual the town is a popular pilgrim destination for devotees who come to bathe in its holy saltwater and make offerings at its temple.
Here is a list to visit in Kanyakumari
1. Vivekananda Rock Memorial 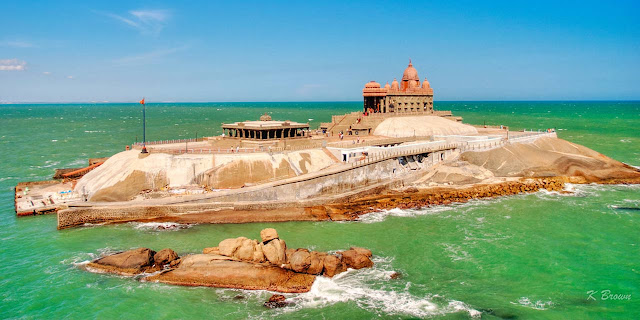 Swami Vivekananda Memorial centre situated on a small rock island in Kanyakumari, India. Revered Indian poet and Hindu philosopher Swami Vivekananda visited Kanyakumari in 1892, towards the end of an extensive trip across India as a wandering monk. His transformation into an influential leader and reformer is attributed to the three days he spent meditating on a large offshore rock, where Goddess Kanya Kumari is said to have carried out part of her penance by standing on one foot. (According to ancient Hindu texts, the Puranas, the rock was blessed by the touch of her foot).  It consists of a pavilion with a life-size bronze statue of the Swami, a hall with information about his life, and a meditation area. There’s also a carving of the Goddess’s foot on the rock.
2. The Thiruvalluvar Statue

Thiruvalluvar Statue, Kanyakumari. A towering statue of the great Tamil poet and philosopher Thiruvalluvar stands on a smaller neighbouring rock, just off the coast of Kanyakumari. The foundation stone was laid in 1979 and the work was completed 20 years later, in 1999. Ferries to Vivekananda Rock Memorial stop at the Thiruvalluvar statue afterwards if the tide permits. It’s possible to go inside the base of the statue and climb the stairs up to its feet for a superb view, as long as it’s not closed for periodic maintenance.
3. Mesmerizing Sunrise and Sunset 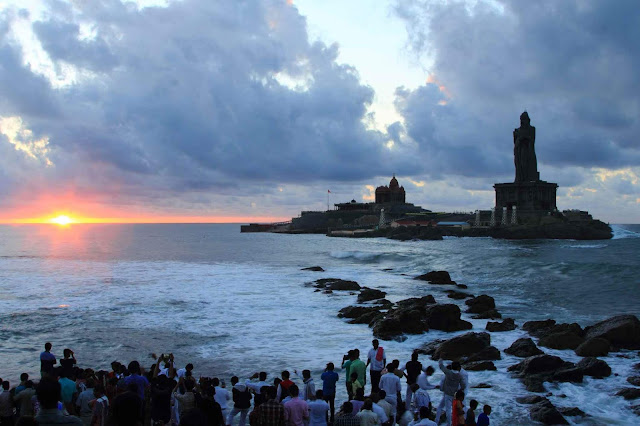 Kanyakumari’s liquid horizon, are among the finest in India. Sunrise, alongside the Thiruvalluvar statue, is arguably the most majestic of the two. However, sunsets are particularly special on full moon nights, when the moon rises from the sea opposite the setting sun at about the same time. It’s not possible to see the sun rising and the full moon setting together. Sunsets into the sea are best viewed from the beach from December to February (and are only really visible from there between mid-October and mid-March). Be prepared to join the crowd! It really swells on Chitra Purnima (the auspicious full moon in April).
4.  Respects to Goddess Kanya Kumari 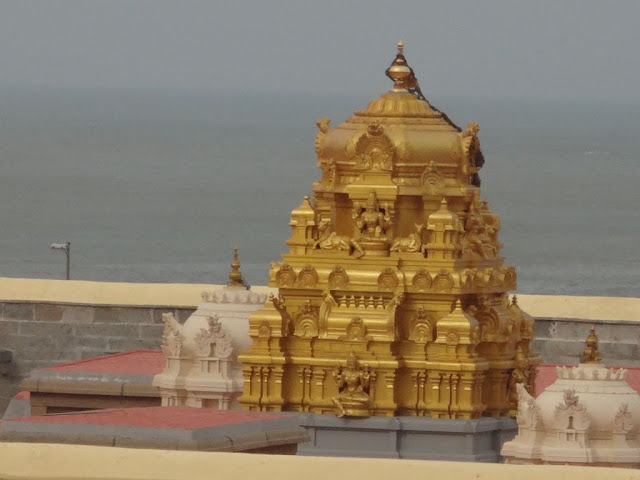 3,000-year-old Kumari Amman Temple (also known as Arulmigu Bhagavathy Amman Temple) is dedicated to Goddess Kanya Kumari, who is worshipped as a great protector after destroying mighty demon king Banasura. This important temple sits by the sea near Triveni Sangam and has a beautiful black stone idol of the goddess. The standout feature is her sparkling bejewelled nose ring. Non-Hindus can enter the temple. It’s open from 4.30 a.m. to noon, and 4 p.m. to 8 p.m. Do note that men must remove their shirts before going into the inner sanctum (where the idol is).
5. Thovalai Flower Market 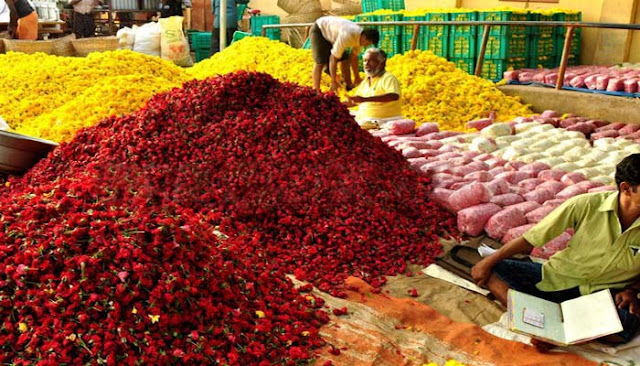 You wouldn’t expect one of Asia’s largest wholesale flower markets to be in a village 30 minutes north of Kanyakumari. The area around Thovalai specializes in growing flowers, particularly an unusual variety of jasmine, and the market there brims with piles of scented buds. Vibrant roses and marigolds add to the colourful spectacle. Get there early though. The market opens before sunrise and concludes by around 10 a.m.

6.  The Shops and Stalls 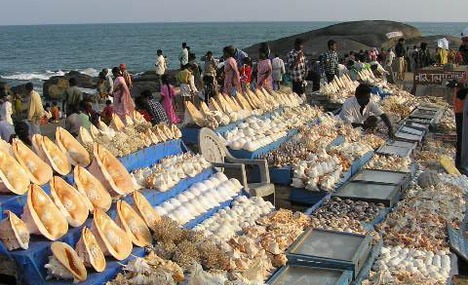 Shells, painted shells, handicrafts made from shells, and products decorated with shells dominate the souvenir selection at Kanyakumari. They’re sold everywhere and collectors will love them! You can even get a customized shell with your name engraved on it. Vendors line the seafront walkway with an array of colossal shells.  the main market area leading to Kumari Amman Temple. This market has shops selling lovely woven handloom saris as well.