By: Shweta Tomar
With: 0 Comments
Innovators from IITs and AIIMS are working on technologies to checkmate coronavirus. While some have developed apps aimed at ensuring people adhere to quarantine rules, others say they have mechanisms to sanitise entire cities. 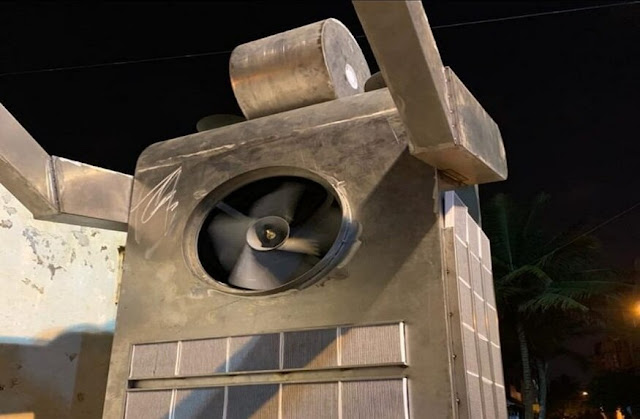 While IIT Kanpur is working on low-cost portable ventilators, IITs has developed an app – CORONTINE – to track those who jump quarantine. IITB has come up another app called SAFE to keep track of adherence to quarantine period by a large group.
Joining such initiatives, new technology has been launched by two young innovators who are alumni of Indian Institute of Technology (Kharagpur) and All India Institute of Medical Sciences – Debayan Saha and Shashi Ranjan respectively.
The duo has developed a device, Airlines Minus Corona, that is aimed to sterilise the city and be used in hospitals, public spaces to kill the effects of the virus with just the use of water and electricity.
The founders of this device say that the West Bengal government has shown interest in installing it. They would also initiate talks with the Delhi government. The design is like Robo Sapien (human-like) machine that operates on the mechanism of charged water droplets which are ionised using the corona discharge.
“The ionised water in return oxidises the viral protein reducing it to a non-harmful molecule,” said Ranjan. Work on this device started in March.
The innovators said that oxidation is one of the most potent antimicrobial tools which can sterilise an entire city. “Our technology uses an optimal combination of electric energy and water atomisation techniques to induce a charge on water droplets while creating the most potent oxidative entities, hydroxyl radicals that can oxidise and kill the coronavirus,” they said.
We have known alcohols as agents to make a virus ineffective by breaking the protein coat. But in larger spaces and scales, use of alcohol won’t be effective and will have limitations, explained Ranjan.
“Alcohols (like ethanol or IPA) are known to inactivate viruses by denaturing their protein coat. But the alcohol-based hand sanitiser is useful for individuals or for sanitising surfaces at a smaller scale (home, offices, etc.) in the fight against coronavirus. However, this is insufficient in such an emergency as it is impractical to use alcohol for sanitising cities,” said Saha.
The duo wants to take it to other states as well, as cases in India are increasing. The virus has infected more than seven lakh people worldwide and claimed over thirty-five thousand lives. The ministry of health and family welfare said on Monday that 92 new cases of COVID-19 and four deaths have been reported in the last 24 hours. This takes the total number of cases to 1071 and the number of deaths to 29 in India.
2020-03-31
Previous Post: OnePlus 8 series now official launch date announced.
Next Post: Central Park will be the site of a new hospital for noval coronavirus patients.